We describe here how to use CAMP to vary the testing configurations of a made-up service called Awesome. This example includes the following five components:

Here is the YAML snippet that captures it:

We can ask CAMP to generate all the possible configurations, as follows:

The figure below shows what configurations CAMP generates. 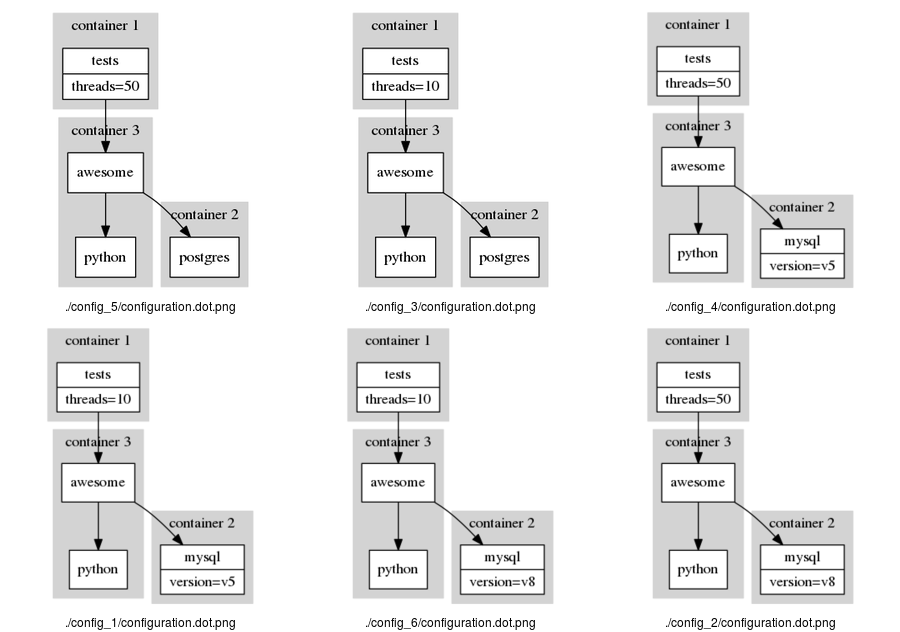 CAMP can enumerate all the possible configurations, but it can also generate a smaller subset that covers all possible variations at least one (i.e., components and variable values).

In the previous example, CAMP generates only the three following configurations:

The CAMP model distinguishes between services and features. Services are endpoints exposed on the network whereas as features are capabilities available within the same container.

CAMP only connects component instances when one provides at least one of the services the other requires. The same hold for features, the only difference is that a component can only use the feature of a single component.

CAMP let you defined the variables that may vary in each component. When CAMP instantiate these components, it will try to find values for each variable defined in related the component. Variables may be of several types:

You can also add constraints using the Ozepy DSL in order to rule out some configurations. This is done in the constraints section, placed at the top level, as follows:

Here we define a constraint that force all the component instance, to have 0 as the value for all their variable. We must refer to the CAMP metamodel to write correct constraints.

CAMP also generate Graphviz representation (file named configuration.dot) of each configuration it generates. Provided that graphviz is installed, you can convert a configuration using:

Alternatively, you can convert all configurations using the following on-liner:

You may also want to gather all these configuration views into a single picture. Provided the imagemagick tools are available on your machine, you can use the following command:

The figure below illustrates the CAMP model. The green classes will be generated by the constraint solver, whereas the yellow ones are specified in the YAML file.