CAMP (Configuration AMPlification) takes as input a sample testing configuration and generates automatically a number of diverse configurations. The generation is guided by predefined features and constraints, and utilizes a set of reusable pieces. The current version of CAMP is focused on the Docker environment, and the input and output configurations are specified as Dockerfiles or docker-compose files.

If you try CAMP, feel free to: 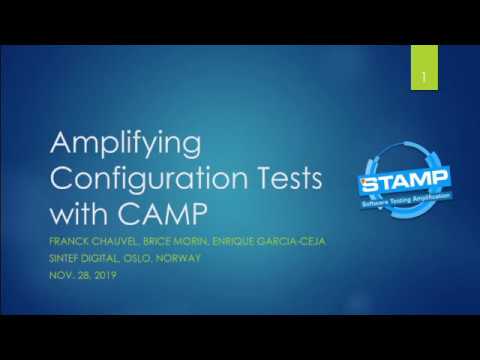 The fastest solution is to use docker to run CAMP and all its dependencies in one container, using the following command:

The Docker image include all samples available on Github.

From there, CAMP will generate, realize and execute alternative configurations, each with alternative variations.

In the samples directory of the repository, there are two examples, XWiki and CityGo.

How does CAMP work?

CAMP extracts from the input Docker specifications an abstract configuration model, and tries to synthesize new models based on the features, variables and constraints. The figure below illustrates the approach:

The new models will then be translated back into Docker specifications. These specifications can be executed in the same way as the original input, and therefore to replace the original testing configuration during either the manual testing or in a continuous integration pipeline.